Transcranial Magnetic Stimulation or TMS is a fairly new tool for mental health providers.  In the US so far it has been FDA approved for treatment resistant depression and OCD. In Europe it has been approved for many other additional disorders (such as PTSD, bipolar disorder, chronic pain, ect).  TMS is an alternative to medication treatment due to no systemic side effects and unlike ECT, which is also a non-medication treatment, TMS has no associated side effects of memory loss or cognitive deficits. This article was authored by Dr. Rose George and Liana George.

TMS utilizes a coil of wire to create a magnetic field which when moved back and forth (pulsed) induces a current in the underlying area.  Since a magnetic field can penetrate the skull TMS has been developed to treat various psychiatric disorders. Repetitive TMS mean repetitively pulsing the treatment area of the brain and is referred to as rTMS.  There is significant technology and engineering that needed to come together to create the TMS treatment equipment and protocols. 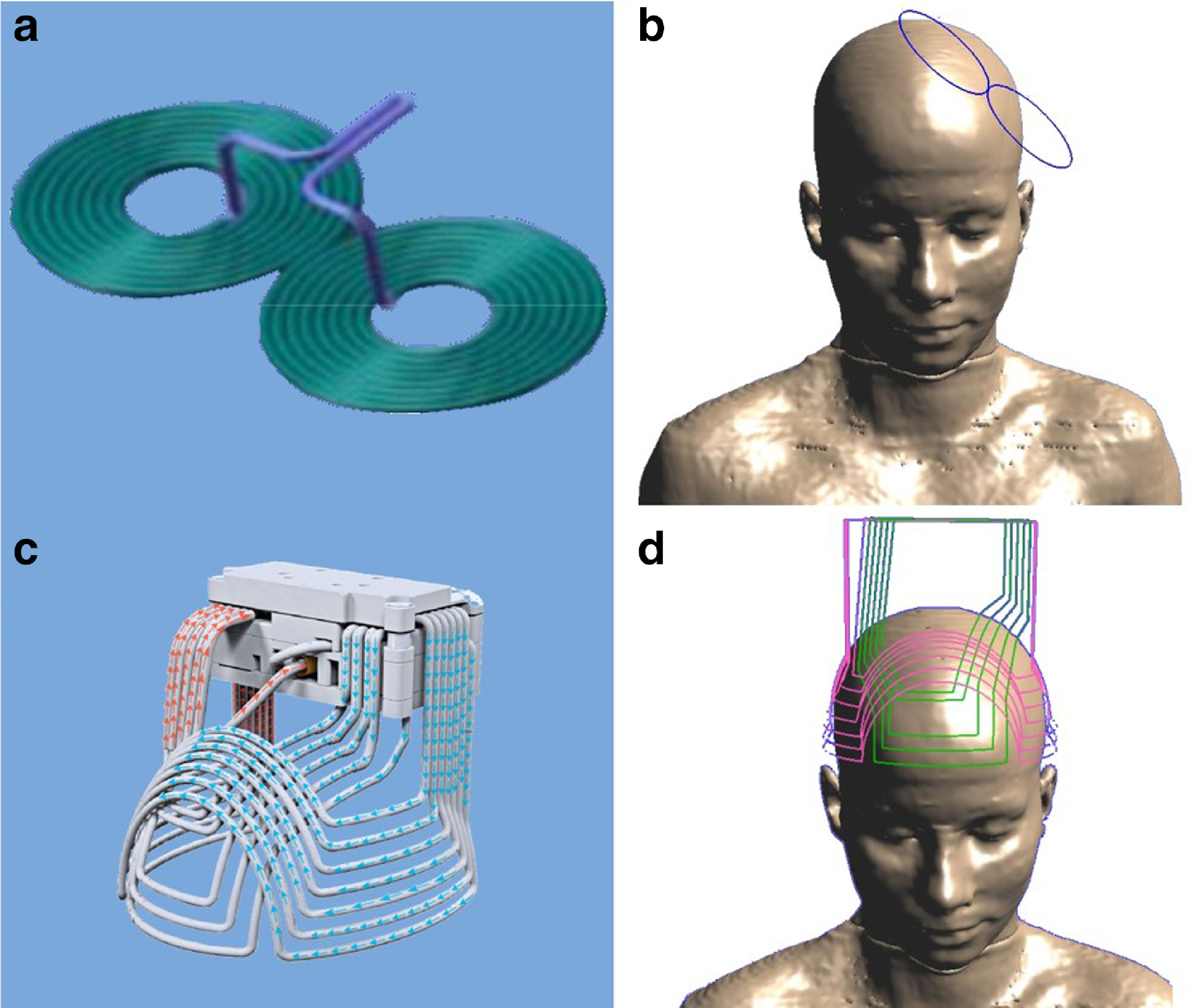 The Brainsway deep TMS H1 coil, because of its greater number of tangential coil components, generates a larger area of magnetic field effect and has been shown to penetrate 1.8 to 2.8 cm into the brain whereas the figure 8 coils have a maximum penetration depth of 1.1 cm.  This greater penetration and larger area of magnetic field effect allows for a greater area of the brain to be stimulated during treatment with the same energy constraints so that safety limits are not violated.

Visual simulation of area of stimulation in brain of H1 vs figure 8 coil. Colors show level of activation, with dark blue being lowest and red being highest. Image source: https://www.sciencedirect.com/science/article/pii/S0924977X19302676#fig0003

TMS treatment has significant evidence of effectiveness from three Level 1 randomized controlled trials which demonstrated clinical benefit in treatment courses up to 6 weeks in duration. In clinical practice 75% of patients treated with deepTMS  improved (at least 50% of symptoms alleviated) and 50% remitted. In studies, patients were treated with TMS monotherapy which was significantly effective but pairing treatment with antidepressants and TMS has shown greater effectiveness.

Currently, most insurances will cover TMS treatment in adults who have treatment resistant depression if they have had adequate trials of medication (usually 4 medications of which there have been trials from 2 different medication classes including 2 medications from the antidepressant class) and a trial of recommended therapy of adequate frequency and duration.  A course of TMS treatment consists of 20 minute daily treatments, 5 days a week for 4-6 weeks then 6 taper treatments over the next 3 weeks. Since there are no systemic side effects or cognitive side effects, a person can drive to and from treatments and return to their normal daily activities after a treatment.

For bests results during TMS treatment series, it is recommended that the patient keep consistent with daily schedules (sleep and work schedules), medication dosages, ect… and if changes are made notify the TMS technician to determine if adjustments to the treatment are required.  Seizures are a rare side effect of TMS. In clinical trials, there was approximately one seizure for every 90,000 TMS treatments.

Currently OCD treatment, although FDA approved with TMS, is not usually covered by insurance; however TMS treatments for OCD can be partially covered by therapy billing since exposure therapy is part of the TMS procedure. There are other off label applications for TMS that are currently available including bipolar depression, PTSD, anxiety, and negative symptoms of schizophrenia.