An overview of the main study investigating deepTMS for OCD treatment

An overview of the main study investigating deepTMS for OCD treatment by Dr. Rose George and Liana George.

Obsessive Compulsive Disorder (OCD) is a severe disabling condition that affects approximately 2-3% of the population. People with this disorder suffer from obsessions (intrusive, repetitive thoughts provoking anxiety) and compulsions (repetitive, compelling behaviors, often in response to an obsession). 1

There is a particular area of the brain that has been shown to be involved in OCD symptomatic individuals: that is the connection between the cortex, the striatum (basal ganglia), and the thalamus. To summarize, the cortex, specifically the anterior cingulate cortices (ACC) and orbitofrontal cortices (OCC), are reported to be involved in processes that are impaired in OCD.  These areas of the cortex are involved in error detection and emotional, reward, and behavioral information. The basal ganglia is involved in measuring the perceived “gain” for performing certain behaviors or motions. And the thalamus acts as a relay and integrative site that connects other areas of the brain.

These three areas are in communication via signaling pathways or loops: sensorimotor, cognitive, and limbic.  The structures involved in the OCC/ACC limbic loop appear to be hyperactivated in individuals with OCD when at rest or when provoked to perform behaviors or emotions.

Brain scans of patients with OCD clearly show this hyperactivity and imbalance, although the exact causes for why this happens are unknown. https://www.ncbi.nlm.nih.gov/pmc/articles/PMC4476073/ 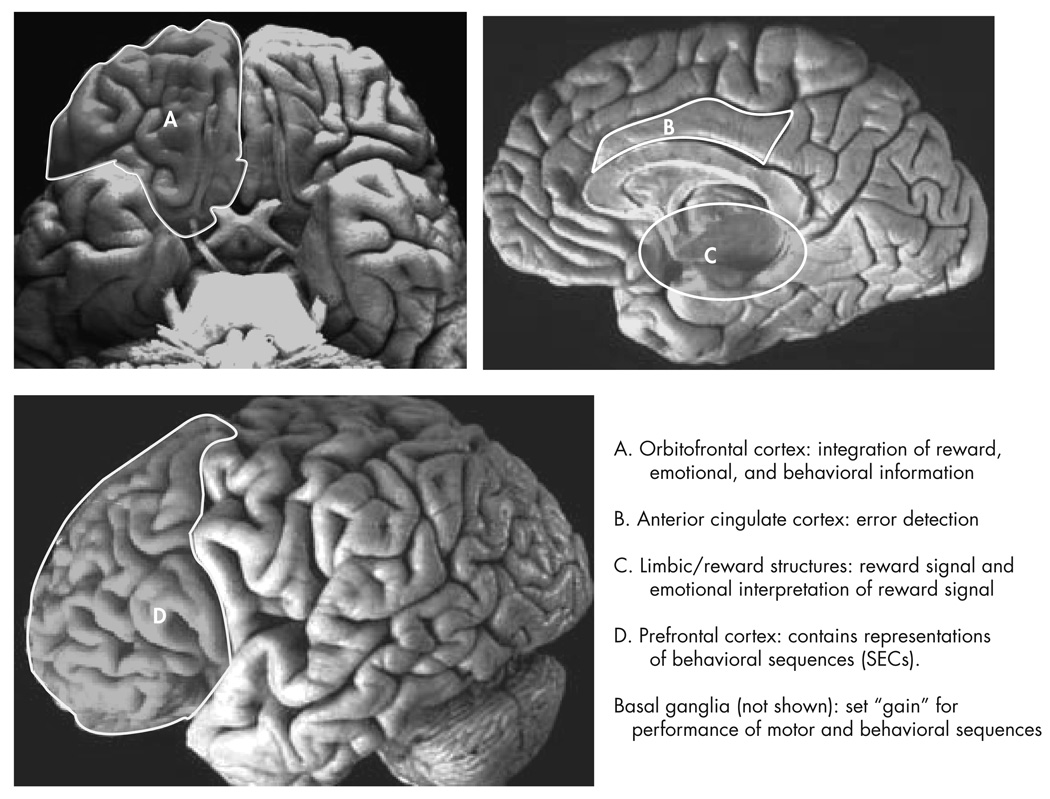 How is OCD Treated Using TMS?

OCD is most commonly treated with medication and cognitive behavioral therapy.  When treatment attempts are made only 40-60% of individuals with OCD reach remission. 1

Studies show that Brainsway Deep TMS (dTMS) is an effective alternative to traditional therapy. The concept behind TMS is to send electromagnetic pulses into the brain to cause signals between brain cells; depending on the position, frequency, and strength of these pulses, the brain can either be stimulated to become more active or less active. Because these pulses are generated with electromagnetism (similar to an MRI) and are low energy, TMS is considered non-invasive and low-risk.

For a comprehensive explanation of the different kinds of TMS technology, see our article: https://brighterdaytms.com/overview-of-technologies-in-transcranial-magnetic-stimulation/

The study, “Efficacy and Safety of Deep Transcranial Magnetic Stimulation for Obsessive-compulsive Disorder”, was published in the American Journal of Psychiatry. The study investigated a non-medication treatment for OCD using dTMS with the H7 coil, which was specifically designed to target brain areas involved in OCD. The study was randomized, double-blind placebo-controlled. This study and the pilot study which preceded it were the first to show consistent positive results from stimulation of the ACC and mPFC (in the brain), and led to approval for treatment of OCD from the FDA in 2019. Since FDA approval, some insurance companies are providing coverage for this non-medication treatment option for OCD, usually through single case agreements or prior authorization.

In the study, 99 patients from 11 clinics were randomly divided to receive either a sham or dTMS treatment.  The dTMS group received 6 weeks of daily dTMS treatments with the H7 coil; each treatment (whether in the Sham group or the dTMS group) was administered after provoking OCD symptoms to activate the relevant brain areas. Those who received the active dTMS treatments had significantly greater improvement than those receiving the sham treatments. Every patient had a primary diagnosis of OCD; individuals who had an Axis 1 diagnosis other than OCD or other neurological impairment or seizures were excluded. Also, each patient had a history of medication treatment; each had a failed trial of an SSRI medication (seratonin type antidepressant)  and were either taking an SSRI medication for at least 2 months or had been receiving cognitive behavior therapy maintenance treatment.

How effective is dTMS for OCD?

The outcome measure of the study was shown through improvement in OCD according to the gold standard Yale-Brown OCD scale (YBOCS).  Patients in the study each started with a YBOCS score of 20 or higher. Eighty-nine percent of the active treatment group and 96% of the sham treatment group completed the study. Results reported in the study were as follows: 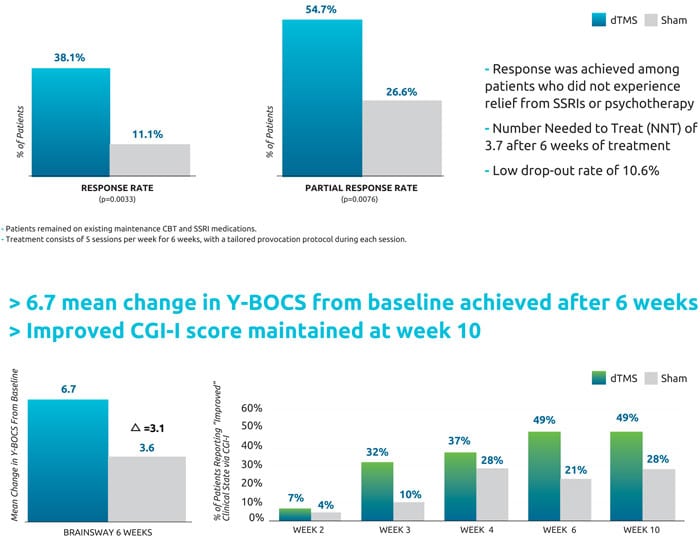 In addition to the YBOCS questionnaire, the participants gave feedback on how they felt their condition had improved or not using the Clinical Global Impression scale (CGI-I). The CGI-I scores were classified into two categories: improved (moderately improved to very much improved) and

not improved (minimally improved to very much worse).

What are the side effects?

What about rTMS? Can it treat OCD?

Previous studies have attempted to treat OCD with rTMS and showed evidence that it caused improvement, but no clear protocol has yet emerged with respect to proper target, frequency and intensity of treatment.  The Brainsway H7 coil is designed specifically for OCD and is the only FDA approved TMS treatment method.