This is part of a series of articles on the variety of disorders treatable by TMS. Follow us on Facebook or check back at our blog to get the latest updates. This article was authored by Dr. Rose George and Liana George.

Transcranial magnetic stimulation (TMS) was first cleared by the FDA for treatment resistant depression in 2008. The concept of TMS itself started in the 1980s and was pioneered by Dr. Mark S George as a treatment option for mood disorders through research at NIH. It really started to take off in 1996 when he received a grant from NARSAD (now BBRF) to further study and improve TMS. His work led to further industry research and eventual FDA approval 1. Now, TMS is approved for treatment resistant depression in Europe, Canada, Australia, Israel, Brazil and the United States 2.

This article will detail TMS concepts in general, though our practice specifically uses the BrainsWay dTMS system. See the following link to learn more about the various TMS device manufacturers: https://www.clinicaltmssociety.org/tms/devices.

Major depressive disorder (MDD) is defined as a mood disorder with symptoms such as persistent sadness, hopelessness, irritability, fatigue, difficulty functioning and more. These symptoms must be present for at least two weeks. Treatment resistant depression is defined as MDD that has failed to respond to at least one medication and therapy, or the medication side effects were intolerable. FDA approval for TMS treatment is specifically for depression that is treatment 3.

From a neurological perspective, depression is associated with various physical differences in the brain. Research has explored several areas of the brain to compare between healthy subjects or those diagnosed with MDD. One such difference is abnormal levels of activity in the prefrontal cortex. Specifically, increased activity in the ventromedial prefrontal cortex, which regulates affection and generation of negative emotion, and lessened activity in the dorsolateral prefrontal cortex, which mediates cognitive functions such as goal-directed action and attentional control. In studying the recovery phase of depression, these levels of activity switch so that the dorsolateral region becomes more active and the ventromedial becomes less 4.

“Activity” is defined as signals (electrical energy) passed between neurons, the cells of the brain. One neuron sends a signal that release neurotransmitters (chemicals such as dopamine and serotonin) that are then received by a second neuron. The signal either continues to be passed along to the next neuron or stops 5.

How does TMS treat depression?

TMS uses a specially designed coil to generate an electromagnetic field able to penetrate the skull (similar to an MRI) this field then generates a mild electrical current in the affected area of the brain (like a neuron signal) that stimulates the less active areas of the prefrontal cortex associated with depression. This increases activity and strengthens this area of the brain to alleviate depression symptoms.

To learn more about the technology behind TMS and differences between coil configurations, see our article: https://brighterdaytms.com/overview-of-technologies-in-transcranial-magnetic-stimulation/

TMS is a milder form of electrical stimulation of the brain that is compared to the more vigorous stimulation of electroconvulsive therapy (ECT), which medically induces seizures, strongly activating the brain, for treating depression. TMS is non-invasive so unlike ECT, no hospital stay or anesthesia is required. The levels of electricity involved are much lower so the chance of causing a seizure is very rare. TMS is safe enough to drive immediately before and after treatment. The most common side effects are scalp discomfort (during treatment) and headaches.

Treatment typically involves daily treatment sessions for 5 days a week for 4-6 weeks followed by 3 weeks of 2 sessions per week. It is important to complete the recommended full series of treatments as this is considered a way of training the brain area under treatment to be active in a new way. Each session lasts 20-40 minutes (Brainsway deep TMS sessions are typically 20 minutes).

How effective is TMS?

Multiple studies indicate that TMS is effective for treatment resistant depression. One specific study (published in the Journal of Psychiatric Research) looked at treatment using BrainsWay dTMS with H1- coil, rTMS with standard figure-8 coil, and pairing with medication. The following results were found: 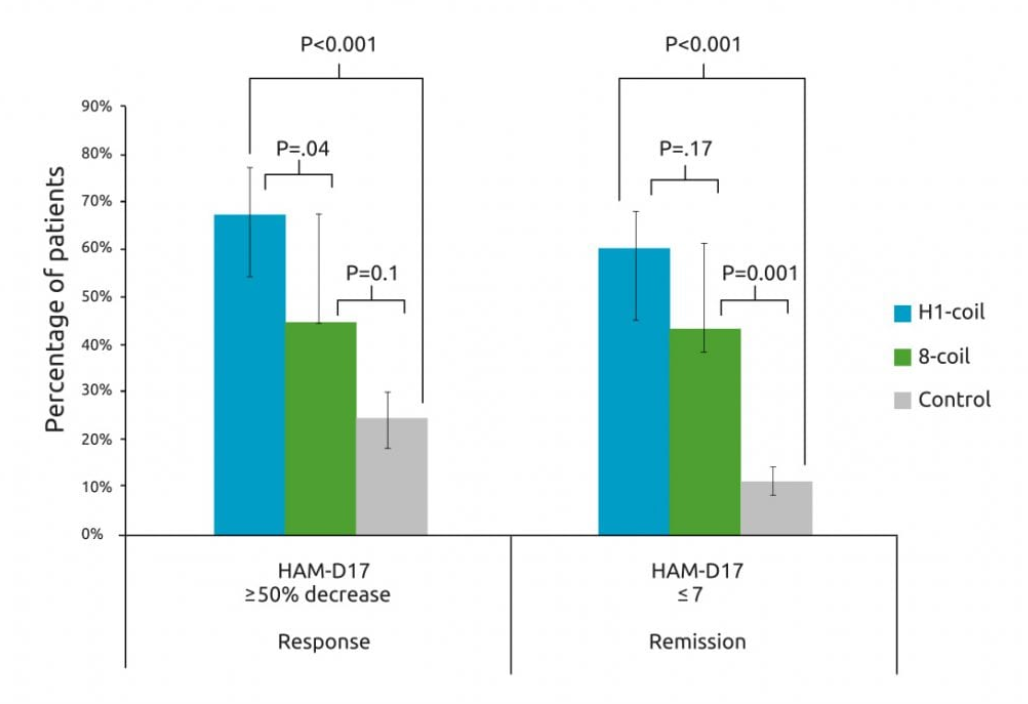 For BrainsWay specifically, reports from real clinical settings (outside of trials/studies) indicate that, after 30 treatment session, 75% of patients showed significant response and 50% achieved remission.

In another study of patients treated with TMS, stimulated areas have physically increased in size. Six clusters of grey matter volume (GMV) that were lower in pre-treatment MRI’s of depressed subjects than in healthy volunteers. GMV in four of these regions increased 3.5 – 11.2% for the MDD subjects after TMS treatment. The affected brain areas are involved in cognitive appraisal, decision-making and subjective experience of emotion. These effects may have potential relevance for the antidepressant action of TMS 7.

TMS is still a relatively new technology with advances and information still being discovered. As such the long-term side effects are not well understood, but short-term results show it to be a viable option for depression treatment, especially for patients unable to respond to medication and therapy alone.

Brighter Day Psychiatry offers free consultation sessions for patients interested in TMS for treatment. To learn more, give us a call at 970-568-8324 or message us at https://brighterdaytms.com/#contact.